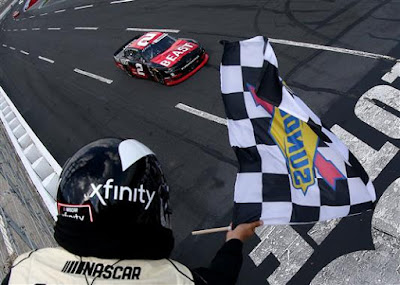 The same couldn’t be said of Reddick’s pursuers, many of whom developed a "Charlotte stripe" on the right sides of their cars.

Ultimately, Reddick, the defending series champion, rolled across the finish line 2.102 seconds ahead of runner-up Justin Allgaier, who couldn’t catch the race winner despite racing on 14-lap fresher tires. The victory was Reddick’s first at Charlotte, his second of the season and the fifth of his career.

"Hats off to all of Richard Childress Racing," Reddick said of the team to which he migrated after winning last year’s series title with JR Motorsports. "We were pretty good going into the two ‘off’ weeks, but we weren't really happy with where we were, and they worked really hard and worked on a couple things, and we were so good when we came back here to Charlotte.

"I'm just so pumped about the work ethic of everyone at the shop and the guys here with me today, they just worked their tails off. We held off Justin Allgaier, who is really tough to beat. I won at Charlotte—a place I used to hate."

Results from the Alsco 300 at Charlotte

Reddick led 110 of the 200 laps at the 1.5-mile track. Allgaier never held the top spot in posting his second straight second-place finish, but by the time he climbed from his car, his thoughts had already turned to the significance of the occasion.

"This is the kick-off to one of the coolest weekends in auto racing but also to Memorial Day," Allgaier said. "I have a grandfather who is no longer with us who served in a war, and this is a special very special day for me.

"My hat’s off to all those who have lost their lives and their loved ones who are still here. Hopefully, we did them justice today."

Jeffrey Earnhardt, grandson of seven-time Monster Energy NASCAR Cup Series champion Dale Earnhardt, finished third and required medical attention after the race, the result of temperatures that exceeded 135 degrees in the cockpits of some of the cars. Nevertheless, after spinning on Lap 141, thanks to a flat right front tire, Earnhardt rallied to finish third and claim the first top five of his career.

Noah Gragson overcame a penalty for an uncontrolled tire to run fourth, followed by Justin Haley, who rallied from a broken axle during qualifying and consequent start from the rear of the field to post a season-best result.

The race took its toll on several of the top contenders of the series. Cole Custer led the first 16 laps, but a litany of misfortunes—including several brushes with the outside wall and one collision with a crush panel that had fallen out of a competing car—relegated him to 24th place at the finish, four laps down.

After his fifth stage win of the season in the first 45-lap segment, pole winner Christopher Bell was running second on Lap 89 when a blown right front tire, the result of a puncture from debris on the track, sent his No. 20 Joe Gibbs Racing hard into the outside wall near the apex of Turns 1 and 2.

Half a lap later, Bell’s teammate, Brandon Jones, smacked the Turn 4 wall with a nearly identical issue. Jones brought his car to pit road as Reddick took the green/checkered flag to win Stage 2. Bell stayed out to try to stay on the lead lap, and that decision proved costly.

As Bell rolled down the backstretch, the inner liner of his tire exploded, damaging the right front fender. Bell brought the car to pit road, where the remains of the tire caught fire in the wheel well of his Supra. As flames licked the right side of his car, Bell exited hurriedly, his race over.

"My car was running good there," Bell said after leaving the infield care center. "I had no warning of blowing a right front. I was actually a little bit loose that entire run. I guess we ran something over.

"I pile-drove the fence, and then, rolling down the back straightaway, I saw my teammate do it there, too. Bummer, but we had a really fast Rheem Supra today."

Jones, on the other hand, rallied to finish 10th. (Reid Spencer/NASCAR Wire Service)