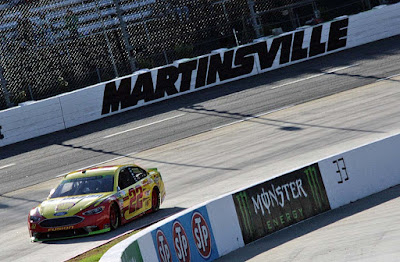 MARTINSVILLE, Va. - Joey Logano became the first driver to punch his ticket to Homestead on Sunday after winning Sunday's (Oct. 28th) First Data 500 at Martinsville. Logano and Martin Truex Jr. battled back and forth during the final laps with Logano coming out with the victory. Logano and Truex were headed toward the checkered flag side-by-side but as the two made contact, Truex almost lost control of his car before recollecting it but by then it was too late and Logano had taken the checkers.

Denny Hamlin threatened to steal the victory but was able to pass Truex Jr. coming to the line earning a second place finish. Truex Jr. finished the race in third while Kyle Busch and Brad Keselowski rounded out the top-five.

As the series heads to the Texas Motor Speedway, Logano is the only driver to have his ticket punched and the weight lifted off his shoulders. Currently, Kyle Busch, Martin Truex Jr., and Kevin Harvick would join Logano at Homestead. Kurt Busch (-25) sits fifth, Chase Elliott (-31) sixth, Clint Bowyer (-42) seventh, and Aric Almirola (-50) rounds out the eight.