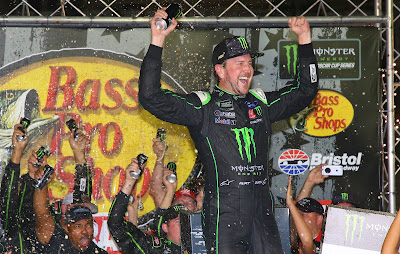 Kurt Busch was able to hold off Kyle Larson, who had fresher tires, to earn his first victory since the 2017 Daytona 500 and first victory at Bristol since 2006. Kyle Busch, who we will get to here in a second, spun out after having a flat tire setting up the final restart of the night. Kurt Busch had a stellar restart in the end that ultimately landed the No. 41 back in victory lane.

After picking up the victory in the XFINITY Series race, Larson was able to finish second falling short of the victory. Chase Elliott finished third while Joey Logano and Erik Jones rounded out the top five.

The intensity kicked off early as Kyle Busch spun in front of the field collecting a good chunk of the field including Michael McDowell, Gray Gaulding, AJ Allmendinger, and Darrell Wallace Jr.. Busch was able to drive off with some damage. Kurt also received some damage on his car from the accident but some barebond kept the hood in one piece.

Busch worked his way back up front and began battling for the lead again, despite all of the damage. Busch and Martin Truex Jr. were battling for the lead when Busch lightly tapped Busch sending him into the inside wall and back up the track. Truex would collect JJ Yeley ending both drivers races ... Busch would come down pit road with a car overheating. Busch would come back set to steal the victory.

Busch was three wide with Jimmie Johnson and Chris Buescher when the three collided causing both Buescher and Busch to have tire smoke. The smoke turned into a flat tire for Busch who then spun. Busch got stuck on the apron and ended up needing a push off. He brought it down pit road and the team changed the tires but it was already knocked out. Busch would cross the line in 20th.

The Monster Energy NASCAR Cup Series takes next weekend off as the series sets up for the final two races of the regular season at Darlington and Indianapolis. With tonight's race complete, Ryan Blaney, Brad Keselowski, and Kyle Larson all three clinch their spot in the playoffs via points. Denny Hamlin and Aric Almirola could clinch as soon as the end of Darlington while Jimmie Johnson and Alex Bowman lie in the hands of the future. Bowman now has a +79 margin over 17th place Ricky Stenhouse Jr.. Ryan Newman sits -91 points out in 18th place, Daniel Suarez is -93 in 19th, and Paul Menard sits 20th -99. (Koelle,2018)