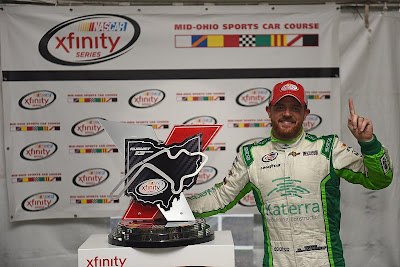 Justin Marks is set to compete in three XFINITY Series road course races with Chip Ganassi Racing starting this weekend at Mid-Ohio. Marks will pilot the No. 42 Chevrolet Camaro SS in Saturday's Rock N Roll Tequila 170, the race he earned his sole XFINITY Series victory in 2016. Chevrolet Accessories will serve as the primary sponsor in all three races he's slated to run.

"It is always special to be able to race for a quality team like Chip Ganassi Racing," said Marks. "To partner that with Chevrolet Accessories on board for all three of the races that I will run is just special. Starting that three-race run at Mid-Ohio will be a lot of fun for me to go back with this team and try to match what we did in 2016. Chip Ganassi Racing always brings great cars to the race track, so I look forward to the opportunity to try and race hard to get the No. 42 back in victory lane where it belongs"