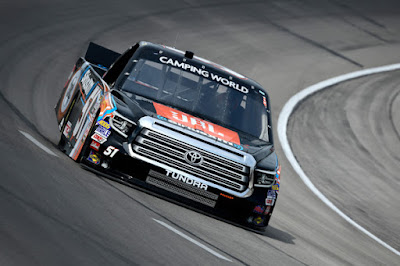 Spencer Davis had a strong showing in his first appearance at the Texas Motor Speedway on Friday. In his fourth appearance in the NASCAR Camping World Truck Series, Davis earned the second top-ten finish of his career along with leading the first laps of his career in the NCWTS.

“Our JBL/SiriusXM Tundra was really strong all night, especially in the first two stages and the start of the third stage," said Davis. "We led some laps in the second stage and got some stage points throughout the race. I got loose after we put on the second-to-last set of tires and fell back to ninth. When we put on different tires we got up to seventh, but I got kind of jacked up on that last restart. There’s not much you can do when your rear tires are spinning up off the ground."

Running a partial schedule in the NCWTS, Davis has to prove himself in the few truck races he does. During Friday's race, Davis led seven laps showing that he can contend against the full-timers in the series. Harrison Burton takes over the No. 51 next weekend in Iowa while Davis returns to the No. 51 at Michigan in August.

“We rebounded and finished ninth which is a little disappointing for how strong we were all day, but I’d like to thank everybody at Kyle Busch Motorsports. There’s no “i” in team, so we’ll go get them at Michigan.” (Koelle,2018)