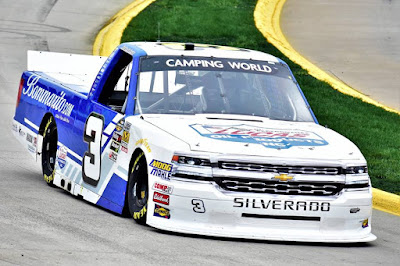 Jordan Anderson was really putting on a performance on Friday in the PPG 400 at the Texas Motor Speedway. Anderson was keeping it on the verge of cracking the top-ten and kept it consistent until the end of his race came early as smoke emitted from the No. 3 Sefton Steel/Mark Martin Podcast Chevrolet Silverado. What was looking to be a sure strong finish wound up being a 19th place finish.

"Finish doesn’t show how amazing of a night we had going in Texas," said Anderson on Facebook. "So proud of everyone that has helped us grow this team to become more competitive each and every week. We’ve been hit with much more before and we keep coming back stronger each time."

The 19th place finish was his second finish inside the top-20 at the Texas Motor Speedway in seven races. During qualifying, Anderson tied his best qualifying effort at Texas of a 17th, two very positive things to bring out of the event. Anderson remains 16th in the NCWTS standings as the series heads to Iowa Speedway.