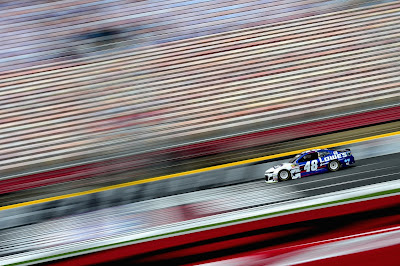 CONCORD, N.C. - Don't hit that panic button yet on the No. 48 team. Jimmie Johnson earned his second top-five finish in Sunday's Coca-Cola 600. Johnson, of course, has eight victories at the Charlotte Motor Speedway, meaning if he didn't leave with a strong finish, blood pressures would be rising as the series enters the summer months part of the season.

On Sunday, Johnson kept his car in the picture during a majority of the 600 miles. With the exception of a spin on lap 121, it was a clean night for the No. 48 team that resulted in a strong fifth place finish.

"For a mile-and-a-half this is good," Johnson told The Motorsports News Source. "We got off in the middle of the race and we were able to get it back so it was nice to tune it back in and not fade too much, so all-in-all it was a good night." 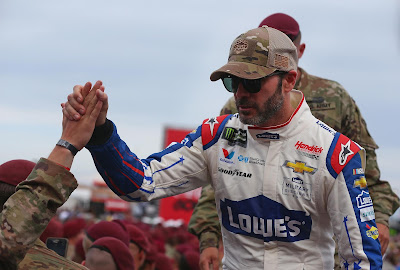 When it comes to a 600-mile race, keeping your car within arm's length on the handling chart can be crucial. Johnson had a sweet spot with the handling of the car but when you want to try to better the leaders with your handling, you have to adjust and just the smallest adjustment can send the car in either direction.

"We had a sweet spot with our car. We tried to adjust to make it better and we just slowed it down so eventually, we put it back and it was pretty competitive. It was just too small of a sweet spot with the car."

Though it's not a win, it's a sign of the team moving in the right direction. A brand new car can set teams off just a little and in a sport that is as competitive as NASCAR, just a little bit can put a car behind the eight ball. Johnson is proving he still has what it takes to compete up front and it could be as soon as this summer when we see the No. 48 in victory lane. (Koelle,2018)