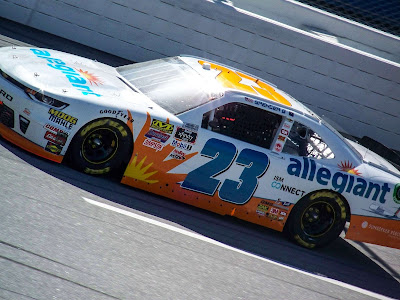 In the 2016 NASCAR Camping World Truck Series race at Talladega, Spencer Gallagher finished second to his teammate, in that race, Grant Enfinger. On Saturday, Gallagher was finally able to take his own spotlight in Talladega victory lane by winning the Sparks Energy 300.

Gallagher took the lead as the field entered the backstretch and never looked back as he crossed the finish line to earn his first career victory.

Brandon Jones was able to make some passes through the tri-oval to earn his best career finish of second while Justin Allgaier, Noah Gragson, and Elliott Sadler rounded out the top five.

Sadler earned the Dash4Cash bonus by finishing fifth, his second straight Dash4Cash victory. Gallagher, Jones, Allgaier, and Sadler will all four battle for the final Dash4Cash bonus of the season next weekend at Dover.

The race was slowed by caution just 5 times for 29 laps. Only one big one happened during the event when  Dylan Lupton got loose on the backstretch, hooking the No. 60 of Ty Majeski. Behind them, Chad Finchum slowed down to avoid the action and got spun into the outside wall by Grala. Overheated brakes caused Spencer Boyd to blast through the crash hitting Finchum and Lupton before coming to a stop in the cluster with Majeski and Ryan Truex