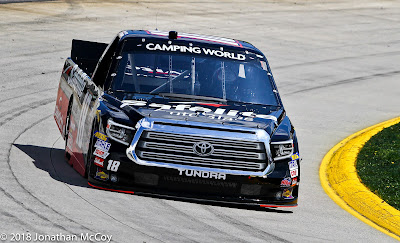 NASCAR Camping World Truck Series driver Noah Gragson will make his NASCAR XFINITY Series debut next weekend at the Richmond International Raceway. Gragson will pilot the No. 18 Switch Toyota Camry for Joe Gibbs Racing. Along with competing at Richmond, Gragson will also run the XFINITY Series race at Talladega and Dover.

"I’m excited to race in the @XfinityRacing at Richmond, Talladega, and Dover with @JoeGibbsRacing in my #18 SWITCH @Toyota Camry! Thank you to Rob Roy and everyone at @Switch for allowing me to live out my dream of a race car driver! This day is a dream come true!" Gragson said on Twitter.

With the next four XFINITY Series races being Dash4Cash races, Cup series drivers are not eligible to compete in these races. Ryan Preece will pilot the No. 18 on Saturday in the XFINITY Series while Gragson will pilot the car in the final three races of the Dash4Cash. So far this season Kyle Benjamin, Daniel Suarez, and Kyle Busch along with Preece have shared the No. 18 Toyota Camry. (Koelle,2018)