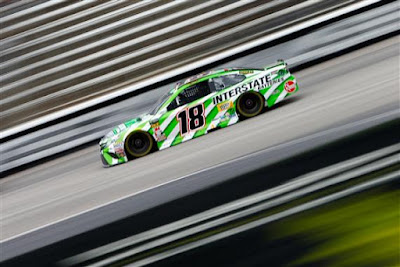 Kyle Busch had to hold off Kevin Harvick in the end but the driver of the No. 18 Interstate Batteries Toyota Camry wasn't going to be denied the victory. Since his last victory at Martinsville in October of last season, Busch has finished either second or third five times. On Sunday, Busch wasn't going to let that number get any larger.

Busch was able to capitalize on pit road mistakes from Kevin Harvick's crew to steal the victory. Harvick led 87 laps but would have to settle for second. Jamie McMurray, Erik Jones, and Ryan Blaney rounded out the top five.

Pit stops were the kryptonite for Harvick as the team was handed a few penalties through the race. Harvick commented on that following the race.

"That was unfortunate. We had a pathetic day on pit road, two days on pit road because of pit guns. When you have a pit gun problem like we have multiple times and been able to overcome it and then today we couldn’t overcome it. Time after time you can’t get the lug nuts tight because the pit guns don’t work.”

The race was slowed by caution eight times for 48 laps. Those eight cautions tied the number of cautions that have been displayed in the last three races at the Texas Motor Speedway.