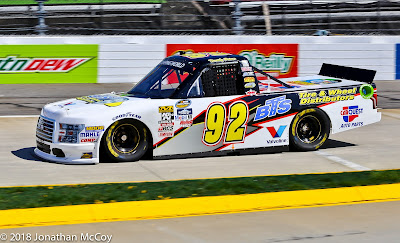 Timothy Peters made his first appearance in the NASCAR Camping World Truck Series of 2018 on Monday. The Providence, North Carolina native piloted the No. 92 BTS Tire & Wheel Ford F-150 for Ricky Benton Racing. Peters return to the series was also the return of RBR to the trucks following their solid debut in the Monster Energy NASCAR Cup Series with David Gilliland.

After qualifying 16th on Saturday morning, Peters had a strong run going 24 laps into the race on Saturday when the red flag was displayed for rain. When the race was resumed on Monday, the speed from Saturday rolled over. Despite not competing for the victory like he's done in the past at Martinsville, a solid seventh-place finish was a good way to return to the series.

Monday's race was Peters 24th race at the Martinsville Speedway. The seventh-place finish was his best since he finished fifth in October. In his last race in the NASCAR Camping World Truck Series, Peters finished 10th at Homestead with Young's Motorsports. Peters earned his best finish since Charlotte last May where he finished fifth. It is unknown if it was a one-off deal or if Peters will return with RBR later on in the season. Peters was left without a full-time ride after Red Horse Racing ceased operations (Koelle,2018)