Plan in Place Should Weather Interfere at Martinsville 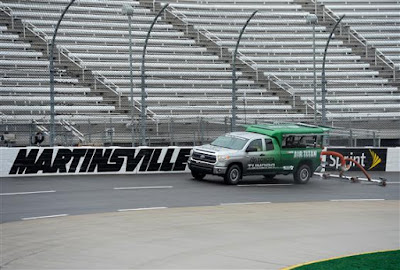 NASCAR announced on Friday Night that if the NASCAR Camping World Truck Series Alpha Energy Solutions 250 gets postponed, it will run on Sunday following the STP 500 Monster Energy NASCAR Cup Series race. It will be run at approximately 7 p.m. ET on FOX Sports 1.

Should weather interfere with Sunday's STP 500, it will be run at noon on Monday as do most postponed races do.

Should both the Alpha Energy Solutions 250 and STP 500 be postponed, the NASCAR Camping World Truck Series race would begin at 11 a.m. ET with the Cup series following the conclusion of that event. All of that action would be on FOX Sports 1 and broadcasted live on MRN and Sirius XM NASCAR Channel 90.

In its history, the STP 500 has been postponed twice in its history most recently 2010 (1998 was the other time). In 2009, the Alpha Energy Solutions 250 was pushed to Monday. In 2014, NASCAR fans were treated to a double hitter with the Alpha Energy Resources 250 taking place following the Cup series event.

Stay tuned to The Motorsports News Source for any updates on the weekend schedule!(Koelle,2018)