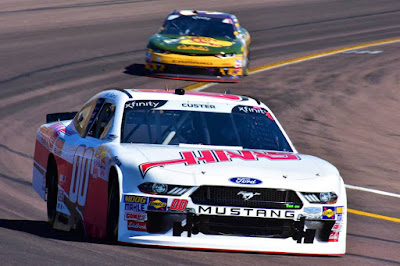 Cole Custer is one of those drivers who is still rebounding from a disappointing performance at Daytona last month. Four races later, Custer has two top-10 finishes and top-five speeds every weekend. On Saturday, it wasn't any different especially after the driver of the No. 00 Haas Automation Ford Mustang led the first two rounds of qualifying and final practice.

“It was a solid day for our Haas Automation Mustang team," said Custer. "The guys brought me a really good car, we just weren’t able to get the track position that we needed at the front there."

Two rain delays put Custer off his game a little bit as it did most of the field and he wasn't able to compete. Custer and his team have been able to find speed during practice now they just need to translate and carry that into the race on Saturdays and Fridays as we reach night race season.

"Another top-10 finish though, so that is something to be proud of. Everyone at Stewart-Haas Racing is working hard and I think it is showing. We are getting closer and closer.”

Custer qualified fourth in his first and only appearance so far at his home track in Southern California. A crash during the race though caused the team to finish 35th in the race. The finish would tie his worst finish of the 2017 season. It would also tie the worst finish of his career before he finished 39th at Atlanta earlier this season. Custer is still chasing his first top-five finish of 2018, could it come in Fontana? (Koelle,2018)
2018 DC Solar 200 Cole Custer ISM Raceway NASCAR Xfinity Series Stewart Haas Racing