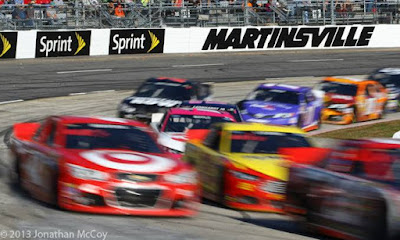 The Monster Energy NASCAR Cup Series is fixing to hand out Easter eggs as the series heads to Martinsville Speedway this weekend. Following Sunday's STP 500, the series takes its first weekend off to celebrate Easter but it's not before we get to the ever competitive "Paper Clp" in Martinsville, Virginia.

The series is rolling off of the "West Coast Swing" that delivered many different storylines as the series heads back east. Kevin Harvick's string of three victories in a row ended at three at Auto Club after he made contact with Kyle Larson which resulted in his car hitting the outside wall. Martin Truex Jr. wasted no time showing he'll be a threat again this season by winning last Sunday's Auto Club 400. Also, don't forget Austin Dillon who won the Daytona 500. The driver earned his first top-ten finish last weekend in Southern California and will look to back it up on Sunday.

38 cars are entered this weekend for the STP 500. DJ Kennington will try his hand at short track racing as Gaunt Brothers Racing makes its return to the series. Also, Landon Cassill will make his return to the series taking over the No. 00 left empty after Jeffrey Earnhardt and StarCom Racing split following Sunday's race at Auto Club Speedway.