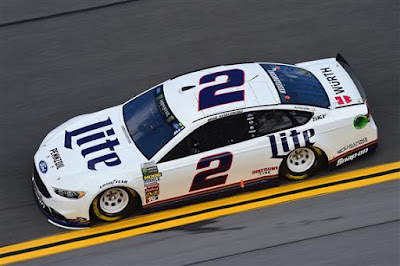 Brad Keselowski held off a late charge from teammate Joey Logano to earn his first victory in The Advanced Auto Parts Clash. Keselowski started the race from dead last and worked his way up through the field.

A huge piece of debris landed on the right front of the car late in the race, which caused some concern, but in the end, the strong Roush Yates Engine held on to the end and earned Keselowski just his second victory at the Daytona International Speedway.

Roush Yates engine fielded a strong powerplant for The Clash and that resulted in Fords filling four of the five positions in the top-five with Joey Logano finishing second, 2017 Daytona 500 Champion Kurt Busch finishing third, and the new kid on the block Ryan Blaney finishing fourth. Pole Sitter Austin Dillon rounded out the top-five.

Kyle Larson had a close call early in the race after getting loose in the middle of turns one and two. Larson went down to the apron but managed to keep his No. 42 DC Solar Chevrolet Camaro ZL1. On lap 35, Jamie McMurray spun and hit the outside wall then he went through the grass doing some lawn work with the splitter. McMurray went back out but eventually took his car behind the wall.

Around lap-45, NASCAR threw the black flag on Ricky Stenhouse Jr. after he went below the double-yellow line to progress his position. Stenhouse would finish the race 16th, one lap down.

On the final lap, Larson got Jimmie Johnsons car upset which caused it to turn into the outside wall which would cause the sole big-one of the event involving a good chunk of the field including Kasey Kahne, Kyle Busch, Chase Elliott, and others. Everyone was checked and released from the infield care center.