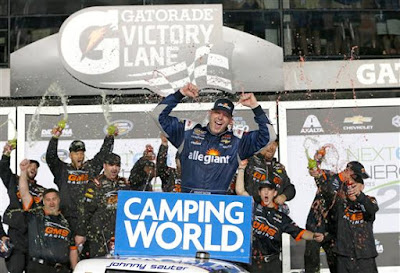 Johnny Sauter held off a late charge from teammate Justin Haley to earn his third victory at the Daytona International Speedway. Sauter took advantage of pole-sitter David Gilliland, who had dominated most of the race, being involved in an accident. Joe Nemechek finished third; followed by Ben Rhodes and Scott Laggasie Jr.

Sauter earned his 18th career victory in the NCWTS and also punched his ticket to the playoffs with the victory at Daytona.

The race was slowed by seven cautions for 35 laps including one red flag that lasted four minutes and twenty seconds. Jennifer Jo Cobb was involved in an accident on lap 56 which sent her into the inside wall. It bruised her arm pretty badly, but she will return next weekend at Atlanta.