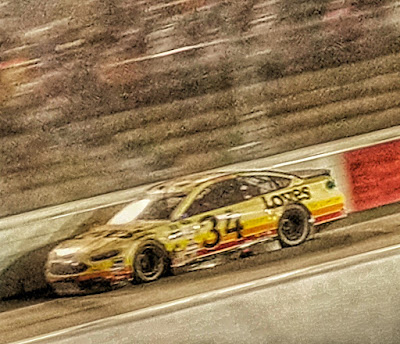 As baseball continues its run toward the playoff's, Boston, Baltimore, Detroit, San Francisco, and St. Louis are all in the Wild Card Hunt. Here in NASCAR Chris Buescher is the Wild Card and could be like the San Francisco Giants and win the NASCAR Sprint Cup Championship for Front Row Motorsports by the end of the season.
Tonight our Wild Card driver had one of those tight games that ended in a victory with a walk off home run, sending them to the Playoffs, in their sights next weekend at Richmond.
Tonight all the #34 Love's Truck Stops team and Chris Buescher had to do was stay consistent and stay out of trouble. The equivalent of smart Baseball Playing, with no unnecessary moves that could harm a player. Buescher started the race from 31st and by lap 20 was inside the Top-25. Through the night, Buescher stayed inside the Top-20 and was able to squeeze in a 17th place finish. Buescher is kind of like the team who is a half a game ahead of second place and just need to be consistent or hope others lose and the luck comes out in there hands. At the end of the night, The team could be heading to the Playoffs and that playoff is the NASCAR Sprint Cup Series Chase for The Sprint Cup. (Koelle,2016)
Bojangles Southern 500 Chris Buescher Darlington Raceway Front Row Motorsports NASCAR Sprint Cup Series