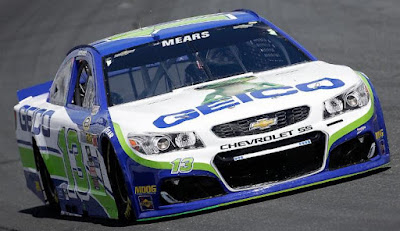 As a string of challenges plagued the team during the past month, Casey Mears and the GEICO Racing crew looked to wipe the slate clean and build momentum for the second-half of the season - starting with Sunday's event at New Hampshire Motor Speedway. Unfortunately, an ill-handling Chevrolet would relegate the Germain Racing team to a 27th-place finish at the one-mile oval.

Starting from the 21st position, Mears quickly reported in the opening 10 laps that his GEICO Chevrolet was "plowing tight in traffic." When the competition caution was displayed on lap 35, the California native said the No. 13 machine needed a "massive overhaul." Taking his driver's advice, Crew Chief Bootie Barker called for four tires, fuel, air pressure and wedge adjustments, placing Mears in the 29th position for the lap 41 restart.

A lengthy green flag run ensued, until lap 100 when the second caution slowed the pace with Mears in the 31st position. The GEICO Racing machine came to pit road for four tires, fuel, air pressure, wedge and a radiator pan adjustment. During the middle portion of the 301-lap race, the team continued to work on the handling of the GEICO Chevrolet, with Mears saying the adjustments were "definitely better but still fighting loose on entry and exit."

Filled with determination, the Germain Racing crew continued to push through the adversity. As the third caution waved on lap 219, Barker instructed Mears to take the wave around to regain one lap. With 24 circuits remaining and business heating up on the track, the veteran driver held the 30th position and looked to place himself in the Lucky Dog position. After quickly passing three competitors on the restart, a timely caution allowed the No. 13 machine to earn the award and become only one lap down. Mears protected the GEICO machine in the final nine laps to cross the finish line in the 27th position.

"We had a long day, but everyone on our GEICO team worked hard and we're now focused on Indianapolis next week," Mears said. "Our family has a lot of history at IMS, so I always get excited to get there and get the GEICO Chevy on the track. I will also be stopping the GEICO office in Indy this week to say hello to the associates. Everyone there loves racing, so I appreciate GEICO giving me the opportunity to pop in and say hello."

The NASCAR Sprint Cup Series now heads to famed Indianapolis Motor Speedway for the running of the Crown Royal Presents The Combat Wounded Coalition 400 at The Brickyard. Mears and the No. 13 GEICO Chevrolet will hit the track on Friday, July 22nd for opening practice at 1:30PM ET.