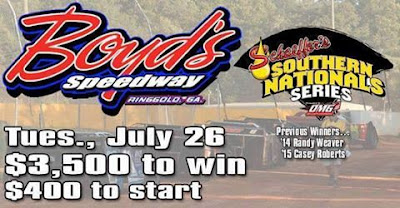 If you enjoyed Wednesday Nights show by the NASCAR Camping World Truck Series at Eldora, Then you should begin to visit your local dirt tracks more often! This Tuesday Night from Boyd's Speedway in Ringgold, GA, just outside of Chattanooga, TN drivers like Cruz Skinner and Ty Dillon will take to the 1/4 mile banked dirt oval in hopes of adding their names to the list of winners at Boyd's Speedway in the Schaeffer's Southern Nationals Series. The event has been held at Boyd's Speedway now for two years Randy Weaver won in 2014 and Casey Roberts won last year. 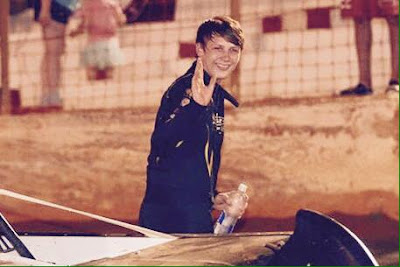 Thankfully to Cruz Skinner and his team we will be attending this season's race at my hometown dirt track, where we will not only cover Cruz Skinner's race but will also cover the Race itself. If you want to come out and join us the address for the track is 1481 Scruggs Rd, Ringgold, GA 30736. Gates open at 5 pm, tickets are $17.00. Hot Laps begin at 7:30 on Tuesday Night. Races that'll be ran on Tuesday include Super Late Models, Crate Late Models, and Sportsman. If you are a driver interested in racing Entry for the Super Late Models is $100.00, Crate is $50.00, and Sportsman is $75.00. (Koelle,2016)
Boyd's Speedway Cruz Skinner Dirt Racing Schaeffer's Southern Nationals Series