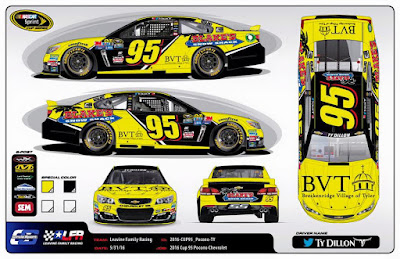 CONCORD, N.C. (June 1, 2016) – A young businessman from Sanger, Texas will have his snow cone business alongside Fortune 500 companies in the upcoming NASCAR Sprint Cup Series race at Pocono Raceway, as the No. 95 Chevrolet of Circle Sport-Leavine Family Racing will showcase two small businesses with causes close to their hearts this weekend. 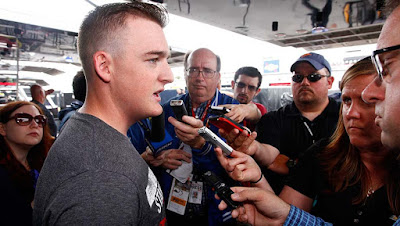 Blake Pyron became the youngest business owner in Sanger, Texas when he opened Blake’s Snow Shack in early May of this year.  Blake, who has Down Syndrome, made national headlines and has been featured on ABC News, Huffington Post and USA Today.

The story reached the desk of Circle Sport-Leavine Family Racing team owner Bob Leavine, who calls Tyler, Texas home, along with his wife, Sharon and daughter, Melynda both of whom hold roles with the race team.  The Leavine family connected with the story not only due to their Texas roots, but also on a much more personal level. 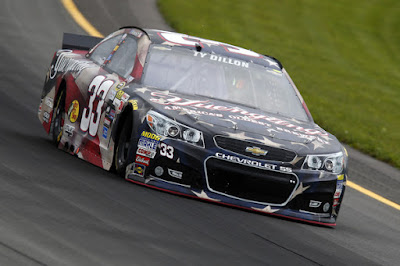 “We learned about this great young man from Sanger, Texas and his family and his story really
related to us,” explained Leavine.  “Tanner, our grandson, is autistic.  He is 21 and after graduating high school in 2015 he is now looking to that next step in his life – similar to Blake and his story.”

“There is a place in Tyler, Texas – Breckenridge Village of Tyler – that our family has supported for a long time because of the work they do and the people there,” Leavine continued.  “We never thought about Tanner going there – but they have taken that young man and helped him grow and contribute.  Tanner has learned skills from cooking to making candles and selling them.  And now he’s on the waiting list to live there.” 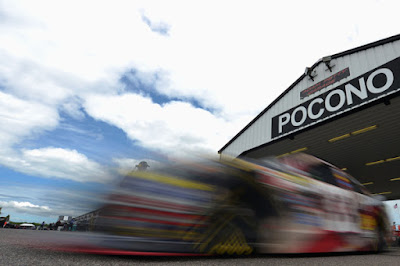 Blake’s story and Tanner’s involvement at Breckenridge Village put the Leavine family into action.
Within just a few days, they had created a new paint scheme for the No. 95 Chevrolet at Pocono that will promote these two companies and elevate the stories behind them.

“These are great stories that people need to be aware of and we had an opportunity to do that on our Pocono car,” said Bob Leavine.  “We wanted to put it on the car so we could make a statement and say, ‘hey we are behind this.’  We need to help our special kids because it takes a lot of resources.  People need to know about this because they can help.  Breckenridge takes donations for support. They have financial aid for those that need monetary help to attend there.”

Mary Ann Pyron, Blake’s mother, was thrilled when she received the call with the opportunity to showcase Blake’s Snow Shack on a NASCAR race car.

“The Leavine family – they touched our hearts,” said Mary Ann Pyron.  “We have tried to show other
people that you can believe in yourself and your child can do anything that they want to.  There is no limit for my child.  And I feel that the Leavine family reaching out and for them to share us with 'NASCAR Nation' is great.  We feel beyond blessed!”

Blake and his father will attend the NASCAR Sprint Cup Series race in Pocono on Sunday, June 5.  The No. 95 crew will wear purple Blake’s Snow Shack t-shirts during the race weekend – the same t-shirts that Blake wears for his business.

“We are 30 minutes north of Texas Motor Speedway so we know all about NASCAR -- we love NASCAR and we love the fans.  NASCAR fans are your every day, hard-working families, and that’s what we are.  This will be our first race.  We’ve never been able to attend one before so this is a dream come true.  Blake is ecstatic – he loves all sports.”

Melynda Leavine Hensley and her son Tanner will also attend the Pocono race along with representatives from Breckenridge Village.

“It is such an honor to have Breckenridge and Blake's Snow Shack on the car,” said Melynda Hensley.  “To bring recognition to these young men and so many more like them is such a wonderful thing. We are grateful that we have this opportunity to bring attention to the things that people with special needs accomplish, to show NASCAR and its fans that there are no boundaries to what they can do.”

“People with special needs are not that much different than the rest of us. They have the same wants, needs and desires as we do,” continued Melynda.  “They only need a little more accommodation and understanding. I would love to encourage everyone to find an opportunity to support people with special needs in their hometowns.”

The AXALTA 400 NASCAR Sprint Cup Series race at Pocono Raceway will take place on Sunday, June 5 at 1:00 p.m. ET.  Ty Dillon will pilot the No. 95 Chevrolet for Circle Sport-Leavine Family Racing at this event.