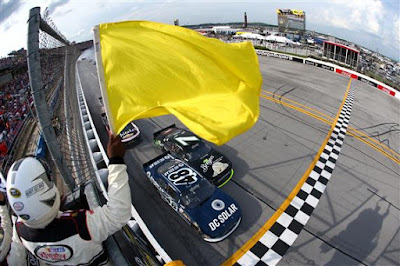 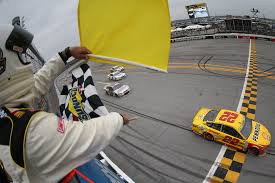 When it comes to NASCAR Races the fans want to see it come down to the wire whether it be a photo finish or a final pass for the win and when we have these races end under cautions it robs the fans and drivers of that final run for a victory or a great finish and in most cases it makes it confusing for the fans when NASCAR has to freeze the field because it's hard to justify their decision for the winner. On Saturday Brennan Poole was the leader past the line but that didn't matter because NASCAR decided to post the yellow flag before anyone got the the line. This made it confusing not only for Brennan Poole but also the NASCAR Fans in the Grandstands and on pit road. Most recently this has happened at Talladega in fact the last 5 Talladega Races including the ARCA Race on Friday ended under caution. I understand very well why Friday's race was ended under caution because I was in the campgrounds at Talladega Superspeedway witnessing the Wrath of the Storm, but the rest ended because of a crash on the final lap. The question remains and will continue to be 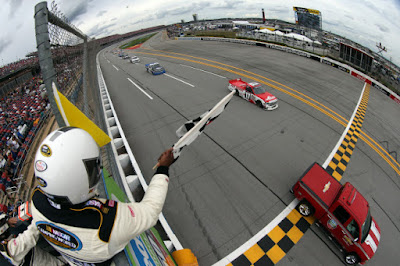 asked on why did the caution fly. What difference does that little bitty stretch from where Joey Logano hit the wall on Friday to the Start Finish line staying under green? NASCAR declared Elliott Sadler the winner but Sadler crossed the line in the 5th spot (As I could see on the replay on youtube) ,but as the field was locked when the caution flag flew Elliott Sadler was declared the winner. Another confusement was with Blake Koch, who continued onto the finish line after making contact with Joey Logano. Blake was then scored 24th but as the Caution flag flew 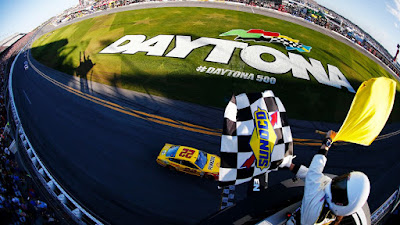 blake would have been in the 10th place but as NASCAR said Blake did not maintain speed and that's why NASCAR scored him in the 24th position. Ending it under yellow is confusing to more than just the fans so why not let them race back to the line if there's just a few yards until the finish line. It's a problem that could be fixed by common sense on when the NASCAR officials call the caution and when they don't. I understand the situation with Denny Hamlin last year where they needed to get the safety officials to him as fast as possible and the field would have been coming back to the checker. I vote we move and repurpose the overtime line or add another that's used after the white is flown. I just think something needs to be done. (Koelle,2016)