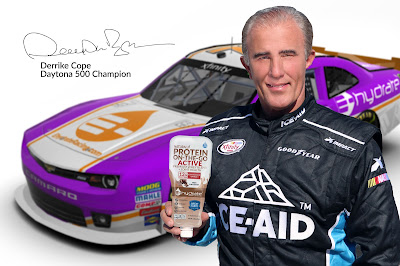 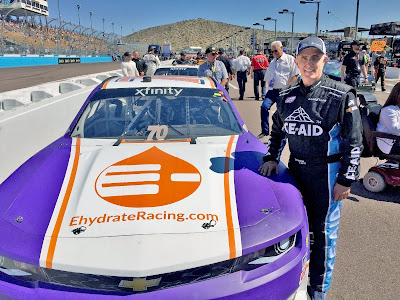 E-hydrate has announced it’s primary sponsorship of Derrike Cope’s #70 car for the NASCAR Xfinity Series race on March 19th at the Auto Club Speedway in Fontana, California to launch E-hydrate’s new natural protein and joint health product, ACTIVE Protein On-the-Go. This race will be the fourth in a series that kicked off in Daytona this year and is part of the brand’s sponsorship of Derrike Cope’s NASCAR West Coast Swing that also included Las Vegas and Phoenix.

Protein On-the-Go ACTIVE is the world’s first ready-to-mix natural protein and joint health product designed for active adults. ACTIVE will be available at Target stores nationwide starting the first week of April, 2016. ACTIVE is low sugar, low calorie, balanced adult nutrition with the added power of glucosamine and Omega 3’s to promote healthy joints. Veteran NASCAR driver and team owner Derrike Cope relies on E-hydrate for race day. “The demands of driving are intense and you have to be in top mental and physical condition. E-hydrate products are natural and give me the nutrition I need to perform at this level. We are extremely pleased to have E-hydrate on board and we’re excited about it’s new ACTIVE products.”

E-hydrate’s Creative Director, Vaughn Juares, was born in Fontana and has strong ties in the Inland Empire. “I’m excited to come to Fontana every year and reconnect and this year is especially great being part of the E-hydrate marketing team to bring this all to life.”

E-hydrate also offers a complete range of natural hydration and protein products for athletes and the entire health-conscious family, which are available at Target and target.com. "It's common for drivers to be treated for dehydration right off the track” says Peter Evans, Chief Marketing Officer for E-hydrate, “bringing E-hydrate to the demanding world of high-performance auto racing makes so much sense. We’re excited to once again support the Derrike Cope team.” (Derrike Cope Racing Press Release)