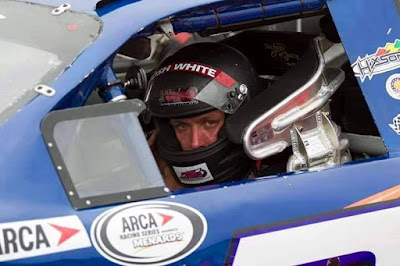 A formal Agreement has been reached between Josh White Racing and A2 Motorsports for the 2016 ARCA Racing Series presented by Menards Season.
Josh White will make his season debut at Salem Speedway on  April 24th in the Kentuckiana Ford Dealers 200 piloting the JWR/A2/Rifle Caddy #84 Ford Fusion. Plans for running the remaining schedule is very promising as the team is gaining sponsorship, resources and media exposure through multiple sources.
"We are very pleased to have reached such an agreement and have our sponsors in place as well as equipment readily available to be prepped and put into race trim so quickly." states Allen Milton. Josh had a stellar season in 2015 finishing 12th in the points standings and looks to carry that momentum with him starting at Salem. One of the teams goals is to not only be a title contender but really emphasize the Super Speedway program. Daytona is our Super Bowl and what better way to set the tone for the season and potential sponsors than to have a great finish at the World Center of Speed on national TV. Aside from the ARCA Series schedule, the team will also continue to offer the A2 Driver Development program as well as the Josh White Racing Experience.
We want both our fans and aspiring racers to be able to interact with us on a teammate level at all times. The teams race shop will be based out of Charleston, WV with driver development  based out of Sylvania, Ga. Sponsorship opportunities, fan interaction, team apparel and driver inquiries are available at Josh White Racing's Website, We are excited for both organizations on the plans thus far and look forward to our future plans in both ARCA and NASCAR with Josh and the talent he brings. Fans can follow along via the teams website as well as Facebook and Twitter. A second entry for the team is expected to be announced very soon. As a crowd favorite, the excitement is expected to grow around Josh and the success that the team is highly anticipating.  You can contact Josh White or Allen Milton directly via the phone numbers listed on the teams website. We encourage you to join the excitement with Josh White Racing in 2016 and beyond. (Josh White Racing with A2 Motorsports)