What Would Happen If Sunday's Race Was Postponed 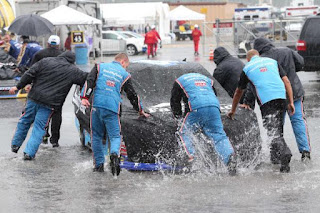 As many of you know Fridays on track activity at Dover International Speedway was cancelled due to hard rain. Of Course you should also know a Hurricane is coming somewhere. Now with about the same weather in the forecast on Saturday, Sunday, and Monday many fans are beginning to question what would happen if the race this weekend was to be postponed to a later date. Of course this weekend is a elimination race for the Chase For The Sprint Cup Series Championship. Below is what NASCAR.com reported and this is what the NASCAR Rule book says.
-"The answer lies in the NASCAR rule 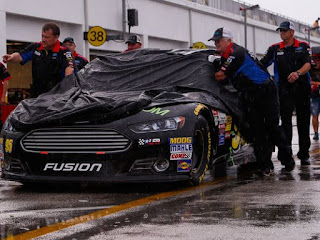 book, which states that four drivers will be eliminated from the postseason after the 29th race of the season. If Dover were to get postponed, and if the scheduled Oct. 10 race at Charlotte Motor Speedway takes place as scheduled, then the Charlotte event would be the 29th race of the season and therefore act as the final race of the Challenger Round." - NASCAR.com
So That would mean The Fates of drivers like Kevin Harvick, Dale Earnhardt Jr., Jamie McMurry, Kyle Busch, and Clint Bowyer will have to wait another week to be resolved. Sorry guys another sleepless night may be coming for you guys. (Koelle, 2015)