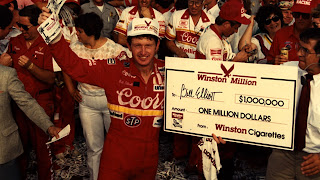 In 1985 Bill Elliott won the Southern 500 to become the first person to win the Winston Million. Winston was the former sponsor of the NASCAR Sprint Cup Series. The Winston Million was when a driver won at least 3 of the listed races which were; The Daytona 500, The Winston 500, The Coca-Cola 600, and The Southern 500 all in one season, The equivalency of the Triple Crown in horse Racing. In 1985 Bill Elliott won 2 of 3 races going into the Southern 500 at Darlington Raceway with Darrell Waltrip winning in Charlotte. Bill lead 100 laps en-route to a Million Dollar Victory. Giving Bill yet another nickname "Million Dollar Bill" would be born.

This Sunday Chase Elliott will attempt his first Southern 500 with the same paint scheme his dad won the Southern 500 30 years ago.