Ryan Blaney is the driver of the #21 Wood Brothers Ford Fusion. His dad is Dave Blaney, a guy who has been around NASCAR my whole life. Ryan has definitely shown he belongs in NASCAR over the past four years. He made his NASCAR Camping World Truck Series debut in 2012 at Bristol with Brad Keselowski Racing, finishing 5th. Since Ryan has won three races since his debut at tracks that include Iowa and The Canadian Road Race.
He made his NASCAR Xfinity Debut at Richmond with Tommy Baldwin Racing, a team who as of late his dad competed for and almost won the Daytona 500 in 2012. In this race Ryan qualified the #36 in the top ten and he ended his debut an amazing 7th place. Since Ryan has drove the #22 Discount Tire Ford Mustang for Roger Penske, Winning his first race in the Xfinity series at Kentucky in 2013. He has only won one other race and that was edging out Kyle Busch in Bristol in August of 2014. In 2015 Ryan is running the 22 car with Team Penske drivers like Brad Keselowski and Joey Logano.
Ryan made his NASCAR Sprint Cup debut in Kansas driving the #12 car for Team Penske, a ride that was also inhabited by Indy Car Driver and former NASCAR Driver Juan Pablo Montoya. He brought the 12 car to a 27th place finish. At the end of 2014 Wood Brothers Racing announced a partnership with Team Penske and Ryan Blaney pitting Ryan Blaney to drive the #21 Race in a limited schedule. The crew chief would be Jeremy Bullins who brought him, Joey, Brad, and Michael McDowell success in the Xfinity Series, including the win at Bristol.
Daytona came and Ryan was ready to roll for the 57th running of the Daytona 500, Ryan would start in the 12th position but after engine failure, Ryan would finish his first Daytona 500 in the 39th position. Wood Brothers next race would be in Las Vegas where Ryan would do double duty. He almost won the previous days Xfinity Race where Austin Dillon would just barely beat him. Ryan’s 2nd Wood Brothers start would fare way better than expected. Ryan finished in the 19th position, a very honorable finish. At Texas the team again had issues ending 42nd. Then Talladega came. Ryan was one of the select few that benefited the new Rapid Fire Qualifying. Ryan started in the 3rd position making you wonder if it was group qualifying how well he would have fared and who knows may have even put that 21 car on the pole. Throughout the race Ryan was lurking in the darkness as you could say and by the time 10 to go came he was 3rd and many were beginning to believe the Wood Brothers would be visiting the Talladega Victory Lane for the first time since 1980, but on one of the final laps Denny Hamlin went for the lead and well many others did too. Ryan then got shuffled back just to run his way back to the 4th position, the first top 10 for Wood Brothers since Trevor Bayne’s Daytona 500 win in 2011.
Ryan proved in Talladega that it’s not IF Ryan Blaney will get his first win but WHEN will he get it. Wood Brothers have Talladega in October on the schedule and many will expect that 21 Car to win at Dega’. Ryan definitely fits the title “New Kid on the Block” His buddy Darrell “Bubba” Wallace Jr., Chase Elliot, Chris Buescher, Ty Dillon, and a few other Younger talent are showing we will have drivers to like, drivers to hate, after Dale Earnhardt Jr., Jimmie Johnson, and the older talent like that to take over their rides. Gillette definitely needs to bring back the old Young Guns ad because we have a ton of Young Guns in the lower series. 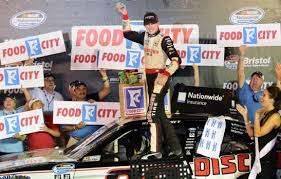