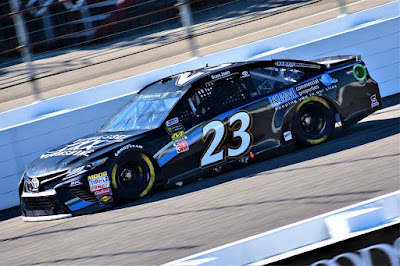 "It's huge to get to race at home," Jones told The Motorsports News Source. "So many people want to come and be a part of it and with us racing so close to home, it makes that possible. Running at Bristol is something I have always looked forward to!"

In a season highlighted by his return to NASCAR for the first time since 2016 and his Cup Series debut at New Hampshire, Jones is looking to just run all of the laps and get as much experience as possible. In four starts this year in the XFINITY Series he has the best finish of 24th at Chicago.

"With so much time out of the race car, almost 2 years before I ran Iowa earlier this year, we just wanted to go knock some rust off and we were able to do that. We have gotten back into the swing of things and the goal in the cup series has just been to run all the laps and gain as much experience as we can. I feel we have done that the first two races and came out with pretty decent finishes.

"But with that being said, I always set myself to a higher standard and I always want more. I'm a very competitive person and that’s what drives me to be better week in and week out. I have learned so much the past few weeks and it has made me a better racer. I look forward to getting more experience at this level and to keep getting better. I think we have checked all the boxes so to speak on what was expected of us and I think we have a really good foundation to build on."

Jones has two previous starts at Bristol in the NASCAR K&N Pro Series with a best finish of 29th in 2012, his NASCAR debut. As Jones noted above, he's looking to run all the laps and gain as much experience at Bristol and it just so happens that Bristol is his home track. Last weekend, Jones earned his season-best finish of 30th at Michigan and he looks to better that finish this weekend.